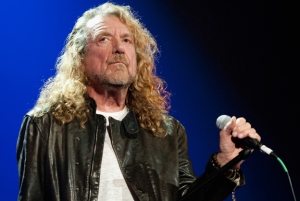 I love Led Zeppelin!!! The loud anthems.  The mystique.  Jimmy Page’s guitar solos.  John Bonham’s pounding drums.  And, of course, Robert Plant’s high pitch squeals.  I didn’t start to enjoy their music until after 1980 when Bonham tragically died, so I never saw them in concert or experienced their magic.  To make up for it, I’ve watched every video and documentary I could find, devoured at least 5 books about them, and listened to every song they’ve ever played (to my knowledge).  My favorite song is “Going to California”, in case you were wondering.

The band reunited for Live Aid, and sounded as good as they could for not practicing much and the size of the stadium (and quality of my rabbit-eared television!).  Then that was it for a long time except for little projects here and there.  Even though there were always rumors of them getting back together, Plant had moved on.  His solo career had begun.

Then in 2007, they played the O2 in London for a one day event with Bonham’s son, Jason taking his dad’s place on the drums, and the magic was back!  Sure Robert Plant’s voice had matured a lot and he didn’t even try his signature high pitch notes, but they looked like they were making a comeback.  The show sold out in a minute.  Millions of people tried to get tickets to their show that held thousands of people.  I was hopeful.

But it was not to be.  I read an article in a magazine a while back.  In it, Plant said he was in Led Zeppelin from when he was 19-32 years of age.  Then, as a 32 year old, he wanted to move on to something else.  He said that the band was only a small part of his early life….Are you kidding me??  A small part??  They were one of the greatest bands ever and he thought Led Zeppelin was a mere stopping point on his full journey as an artist?  So, as promised, he moved on.  He was and still is a successful solo artist, as well as heading up the Band Of Joy and collaborating with Allison Krauss.  He even won a Grammy.  But he said that Led Zep was just another part of his life, when he was younger, and he didn’t want to be like the Rolling Stones: 65 years old and running around on stage like when he was in his 20’s.  To him, LZ was in the past.  His bandmates tried to get him to do one more tour, one last time for the fans (and a lot of $$$!).  They reportedly were offered $200 million!!!  How could he turn that down? I told my wife, who doesn’t like them at all, that I would pay anything and go anywhere to see them one time.  Lucky for her and our bank account, this probably won’t happen!

This got me thinking and rereading some of Plant’s reasons for not putting one of the greatest rock bands ever back together.  He said things like ,”I’ve got to keep moving”, and “You have to be creative and imaginative and move on”, to “I don’t know the guy who sang in Led Zeppelin (anymore)”.

What am I getting at?  Integrity. Passion.  Keep moving.  Keep innovating.  Change and evolve.  These ideas are not just words on paper.  They are anthems as big as “Stairway to Heaven”.

How does this apply to a physical education teacher?  First I’d say stick to your guns.  If you’re doing what is best for students, keep doing it.  There have been many times I’ve been questioned as to my methods and wacky ideas, but I knew it was right.  I knew my kids better than anyone if it was the best game, idea, project, or guest speaker for them.

Next, keep moving forward.  I actually feel bad for Jimmy Page of Zeppelin.  He never let go of the Led Zeppelin legacy.  As successful as he’s been, he is constantly remastering and changing the Zeppelin songs.  It doesn’t seem like he does much else.  It’s all he’s ever quoted about in interviews. He’s over 70 years old and holding on to his past. Plant has a new CD out and is going back on tour this year. Don’t teach the same thing for 20 years and call it a career.  This is my 7th year teaching PE and I’ll admit years 1 and 2 weren’t great.  Then I got on Twitter and Voxer and started having amazing conversations with educators all over the world!  Research new ideas, games and methods.  Put in the work and be honest with yourself.  Are you doing the best you can for your students?  I’ve always said being a PE teacher is easy; being a great PE teacher isn’t.

Finally, Go Big!  Led Zeppelin entered the rock scene and showed the world a sound that had never been heard before.  No one sounded louder, put on a more sensational show, and changed music the way they had.  Be different.  Be creative.  Keep innovating.  And stay the course, no matter what the critics say.  Robert would approve.