“What if I do this, what could happen?” These are the words that echoed in my mind this past summer after leaving the National P.E. Institute in Asheville, North Carolina. My mind was flooded with outstanding ideas that I was anxious and excited to share with my team, some that I knew would benefit our program and others I wanted to try, but wasn’t quite sure how. I knew with the help of the other Coaches I work alongside, we would be able to take the vision I created in my mind and turn it into a reality. I will admit, I had a feeling that some of these ideas might take some convincing, but could be extraordinary if we just gave them a try!

One of these said ideas was a P.E. Ed Camp. This concept was presented by a group called The Physedagogy team; this group was comprised of Collin Brooks, Sarah G-H (her real name is really long!), Naomi Hartl, Matt Pomeroy, Jonathan Jones, Adam Howell, and Bill Bode. The notion behind an Ed Camp is simple: a person or group of people come together to teach something they are interested in, skilled in or is important to them. The beauty of an Ed Camp is that you by no means have to be an expert, you just need foundational knowledge.  If someone attends your session and has something positive to add they may do so in a respectful manner which will in return create a state of collaboration and teamwork.

Adam explained that one of the key aspects of this is to remember you “vote with your feet”; meaning if something appears to interest you, but you find that it really is not for you then you simply remove yourself from that session and try something else. The idea of moving from one station to another is not meant to be an insult to the presenter or the topic but rather an opportunity for people to gain knowledge in an area that is interesting to them. Being the type of person I am, this was a bit of a struggle for me. I attended a session and realized that it was not exactly what I thought it would be, however, out of fear of appearing to be rude, I stayed planted in my seat. I found myself wondering if maybe there was some other session going on that I would receive a greater benefit from.

Here is the problem for me! I live in Fort Myers, Florida where no one in my county had ever heard of an Ed Camp. My solution was simple, in theory at least… I would create my own. My Ed Camp would look very different than most simply because I see more than 100 students in a specific grade level on any given day. I knew that if I attempted to do this on a Saturday or after school the turn out wouldn’t be great. My thought was I could do this with 4th and 5th graders during their P.E. class. To understand why this would work, you first have to understand what my schedule looks like. Our school is on an 8 day rotational schedule for specials- Art, Music and P.E., therefore we see our students, on average, 4 times a week. As a result of this schedule, I realized that if I spent 2 days putting this crazy idea into action, it would not be a complete loss even if it did not go well. This crazy idea would also be an opportunity for me to demonstrate more than 1 of the Florida P.E. Standards rather than simply talking about them.

To set the stage for this idea I first created a Google Form that provided students with the opportunity to sign up to be teachers for any given sport or fitness technique that was of interest to them.

The response at first was slow, however, I did not lose faith that this would be a success! Each day students were given the opportunity to sign up and encouraged to do so for 2 weeks. By this point in the game the 3 other P.E. Coaches had caught my vision for this and together we reinforced how amazing it would be to see students sharing knowledge with one another. Little by little the list grew of students looking to share their passion with classmates as individuals or in pairs. With each day that passed we became more and more excited to see how this would all play out.

My team and I reviewed the list of students who signed up and what they wanted to teach. The list had variety- gymnastics, dance, soccer drills, football throws, hockey stick handling, hula hooping, and juggling to name a few.  I can’t disregard the fact that a few of the proposed lessons scared me but one of my teammates continued to tell me it would all be okay. All I could do was pray she was right! The idea of a 9 year old teaching anything about Tae Kwon Do or a 10 year old showing off skateboard skills was a bit terrifying to me.

As show time approached I took time to explain the role of students who were going to be learning while one of the other coaches, Coach B, explained the role of those who would be teaching to that specific group of students. She reminded them to follow the expectations of our school: Be Respectful, Be Responsible and Be Safe. It was required that they respect the students decisions to come and go from station to station and not be judgmental of any questions that were asked. The “teachers” were responsible for bringing in and or collecting from our storage room the supplies they would need to present their session. Some of them were required to bring in safety gear such as helmets and knee pads but all of them had to be aware if we felt that they were not being safe we would stop their session immediately.

The students were not allowed to simply show up and “wing it”.  We wanted them to put some thought into what they were going to be teaching, therefore a simple lesson plan was required. These student teachers were able to turn in a paragraph or a thinking map of some sort to explain and illustrate what they were planning on highlighting. I was very pleased to see they were excited and willing to do whatever we asked of them in preparation for the big day! 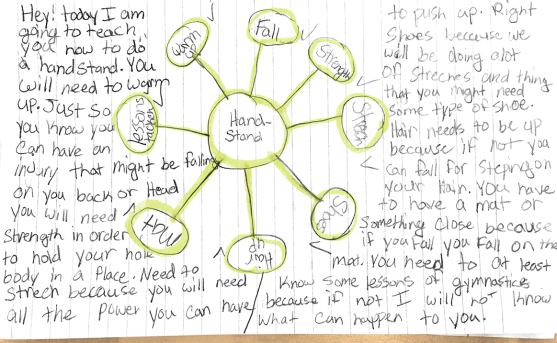 In the days leading up to our main event I passed the reins over to Coach B to plan and coordinate who would be teaching which sessions on which day based off of the classes that would be present on that particular Thursday and Friday. We wanted to make sure that the days had an equal number of stations (or close to it) and not an overabundance of one specific skill or sport. She sorted the lessons and the classes and prepared a schedule and then met with all the student teachers to inform them of their day. Each one of them walked away looking slightly nervous but very excited to teach. 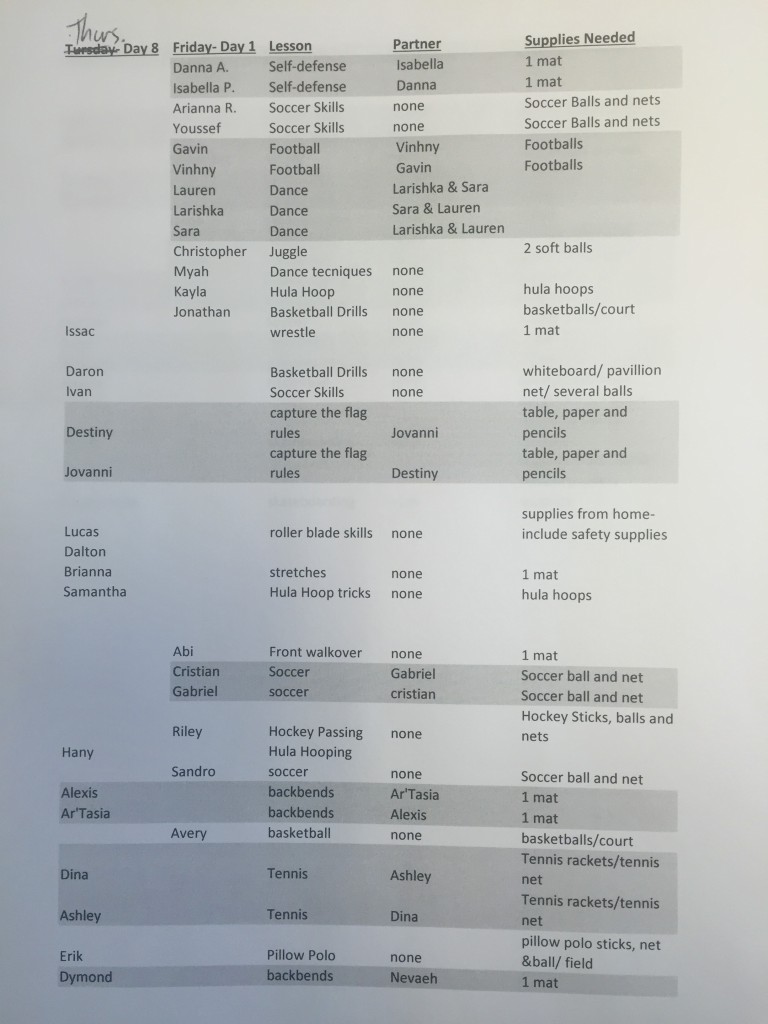 The 1st day arrived and I will confess, I was very nervous that the day would not go smoothly and that we would end up having some kind of an issue. I was very excited to see what my students had to offer one another because I see on a daily basis how remarkable they all are. While I gave a brief overview of the day the teachers were gathering their materials, setting up and getting their bearings about them. The whistle blew and the fun began. Myself, alongside the other 3 coaches walked around monitoring the stations and student progress. The students were seen smiling and laughing as many of them courageously tried new things. As a result of this experimental Ed Camp we had children walk away from school having learned how to actually do a cartwheel for the first time. Time flew by and day 1 was over in the blink of an eye.

As we prepared for the second and final day I realized that while things did not go exactly the way I thought it would, it had been a success. I discovered a few things that needed to be tweaked and modified; On day 2 students were told that they could interject positive information into the lessons being presented, but, they could not take over the station. They also Students were shown a list of the station options and given a moment to think about what they wanted to do. The students who were returning to P.E. for the second day were excited and anxious to begin their day and as a result of that the students new to concept of P.E Ed Camp fed off of that positive energy. The whistle blew and the children scattered to different stations. At one point I looked over and saw our principal learning how to juggle!  I saw a group of girls practicing a cheer basket toss with spotters and the biggest smile you could imagine. On the basketball court I saw a student strapping his safety gear on classmates and helping them bravely climb on a skateboard to work on balance.

My students were given the opportunity to evaluate themselves and their experience. The overall consensus was positive. While some of them did not enjoy this unit, the vast majority did. I opened the floor to discussion and feedback from both 4th and 5th grade groups. For the most part, the students enjoyed learning from one another and not from the coaches, they felt like they were playing an active role in their own learning and not just going through the necessary and required motions. I had children smiling as they explained how fun it was to be allowed to offer their experiences to fellow classmates and others who were willing to try something new because the teacher was someone their age which meant to them that the task at hand was possible. Those who did not enjoy it came into the experience with a negative attitude. They were not interested in anything that a child had to say to them regardless of the level of experience and or knowledge being brought to the table.

This trial run taught me several lessons about myself, my team, my students and my ability to visualize an idea then make it a reality. I realized that I have big dreams for my program and genuinely believe they can happen. My team reminded me that they are willing to do whatever it takes to get the kids ready to try something new even if they have their own doubts. This Sports Ed Camp was something totally new and different and I knew how I wanted it to look, but not how to get there. I was playing a chess game backwards and it worked; it really worked!